QMDJ Case Study - make use of the information and take correct action.

This was forwarded to me by my student. Her father's eyes were having problem. He kept seeing double vision on his left side of eyes. She brought him to see an eyes specialist, done MRI but couldn't find anything wrong. So, she plotted a QMDJ Chart: 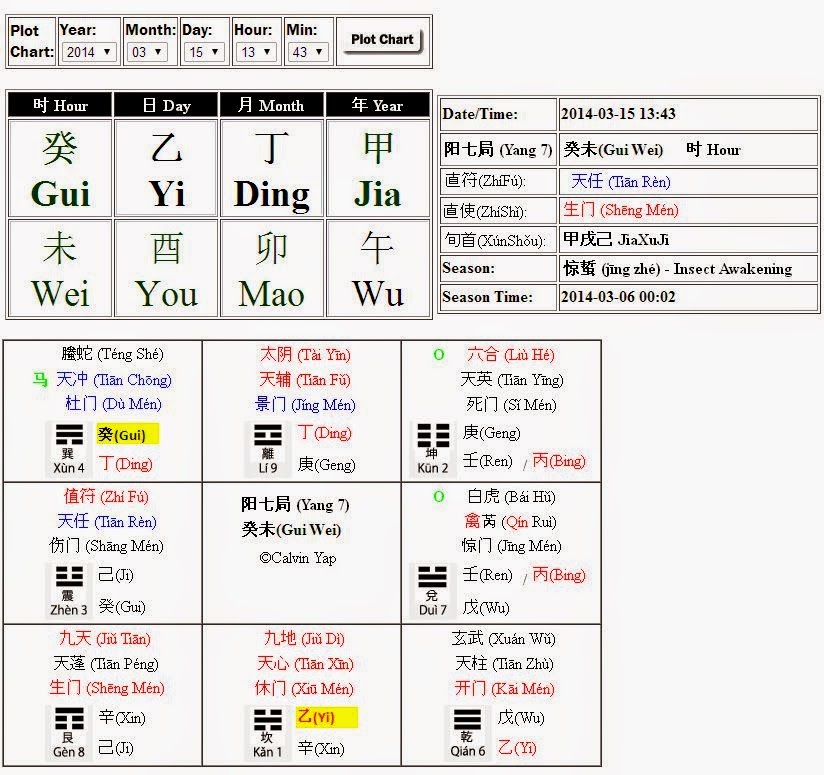 From the chart, Tian Rui sickness star is at Dui 7 Palace, in Kong. So, sickness cannot be detected. That's why the eyes specialist cannot detect what's wrong.

She email me for advise. I told her to find another doctor for 2nd opinion. The reason was that based on the chart, firstly, when she brought her father to consult the doctor, the sickness cannot be detected because Tian Rui is in Kong. Secondly, representing doctor is Tian Xin at Kan 1 Palace with Xiu Men and Jiu Di. So, I gathered that the doctor didn't check thoroughly enough. I asked her to bring her father to see another doctor on Bing, Ren (Heavenly Stems) or You (Earthly Branch) day.

On 15th April 2014, which is a Bing Chen day, she brought her father to see another doctor. This is what she said in her email:

I went with my father to see a new eye specialist yesterday (Bing Chen day). Things happen very fast and within 10 mins the doctor diagnosed my father as border line diabetic. None of us believe initially. But upon checking the blood test report, it was confirmed. And everyone was so relieved. Without telling us, my father actually saw another doctor and she suggested for my father to have an operation for droopy eye lid. But I was all against it coz my father look ok. And luckily I was fast to bring him to see another doctor, otherwise he would have gone to have the operation this weekend.

The chart shows that the sickness cannot be detected. [predict the outcome] So, she decided to seek 2nd opinion on a Bing Day [make use of the predicted information and take action] and managed to find out what's wrong and hence saved him from unnecessary surgery.

However, if she decided not to do anything, [no action done] then her father might go ahead to have the droopy eye lid done. Then the border line diabetic will never be discovered and will eventually become worst.

So, there are 2 things to learn from here:

1. Predict the outcome - take a sneak peep of what's the outcome
2. Take action - to find a date that will reveal the actual truth.

So, in conclusion, Qi Men Dun Jia provides a sneak peep of the outcome. However, if you do nothing about it, then there is no point doing the prediction in the first place.

Posted by Fengshui-Hacks at 06:27 No comments: