Recently I read a news about Angelina Jolie decided to perform double mastectomy to prevent breast cancer. It has shock the world as she had her breasts removed not because she has cancer but as precaution measure to prevent from getting cancer. The actress has a defective gene, BRCA1, which significantly increases her risk of developing breast cancer and ovarian cancer, she writes in the New York Times. The latter disease killed her mother at the age of 56.

According to The Guardian, women with a defect in BRCA1 have on average a 65% risk of developing breast cancer. Jolie says her doctors told her that her risk was 87% and that surgery had reduced it to 5%. The defect also increases the risk of ovarian cancer, which Jolie says doctors estimate is 50% for her.

This really stir up the discussion in the Asia world. Most of the doctors in Singapore actually don't recommend mastectomy until it is necessary.

I remember my Master once told me a couple of years ago that Breast Cancer can be seen as indicator in the Bazi. So, I am sharing this information to the general public so that they are well-informed and to take whatever measure needed. Just note that having such indicator in the Bazi does not mean that you will have Breast Cancer. It only put you in higher risk group. In addition, there is also other factors that require further analysis. For example, the Fengshui of your house - whether it support the sickness or support the curing of sickness. Timing is another factor that needs to be taken into consideration. This is when the sickness can be detected. Like what's being reported, having a defect BRCA1 does not mean you will develop Breast Cancer; it only increase the chances. See my other article on Heaven Earth Man.

Notice that Xin is at Dui 7 Palace with Tian Rui.(Highlight in Green)

Notice that there is Geng and Xin at Dui 7 Palace and Tian Rui at Zhen 3 Palace.


Notice that there Xin and Tian Rui at Dui 7 Palace.

So, does Angelina Jolie has such indicator? See it for yourself:

Qi Men Dun Jia Case Study - Whitney Houston
Note:
This is the first time such information is reveal to the western world. 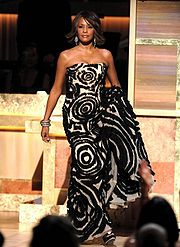 American pop diva with a three octave range, a spectacular video and film actress. A precocious beauty with virtuosity and lyrical authority, she began a carefully planned career in 1981 with TV commercials and guest spots. She also modeled in Glamour and Vogue and sang club dates with her mother, Cissy. With her debut album, Houston sold over 18 million copies world wide. Born into a musical family, Houston began singing in public at 12 in the New Hope Baptist Church in East Orange, NJ.

She began modeling at 17 with shots in "Glamour" and "Vogue," and doing TV commercials. Singing "The Greatest Love of All" in her mom's club show began her career in earnest.

She signed a contract with Arista Records in 1985 and "Whitney Houston" became the best selling debut album in history, earning her a Grammy as well as seven American Music Awards. In 1988 she made $45 million.


Although she didn't think she would marry, Houston met future husband, R&B singer Bobby Brown, in 1989. She has a squeaky clean image where he is from the streets. He proposed in September 1991 and they were married in July 1992.


Bobbi Kristina, their first child, was born in 1993. She miscarried on 7/08/1994 and again on 12/19/1996. Houston was reportedly hospitalized after overdosing on diet pills after the birth of her daughter.


On March 16, 2004, the singer’s publicist announced that Houston had entered a drug rehab program. Houston admitted in a December 2002 television program that she had abused drugs.
In mid-September 2006, she announced that she and Bobby Brown had separated. The singer finally and officially filed for divorce from Bobby Brown on October 16, 2006 in Orange County, CA.


She died on 11 Feb. 2012 around 3.55 pm in the Beverly Hills Hilton hotel, CA, at the age of 48. She was due to perform at a pre-Grammy award party in Los Angeles that evening. Police said her entourage had taken up a large part of the hotel's fourth floor. The autopsy report issued some weeks later stated that she drowned accidentally in the bathtub. The report revealed heart disease and her recent and chronic cocaine use were contributing factors. 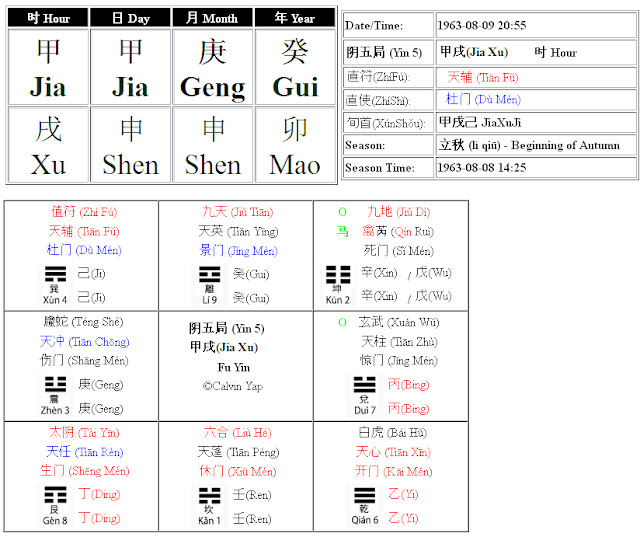 Her House when she died 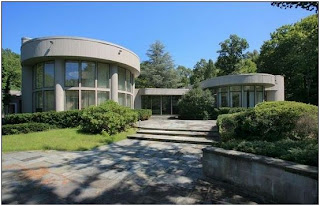 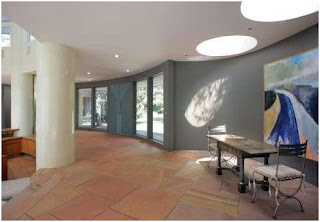 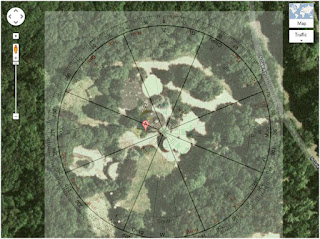 Analysis based on QMDJ Bazi


Looking at her QMDJ Bazi Chart: 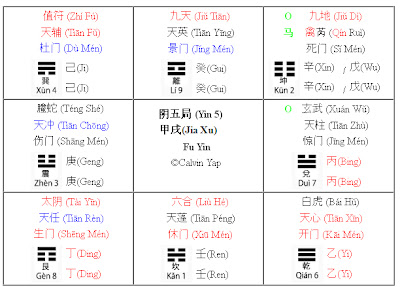 She is represented by Geng at Zhen 3 Palace together with Shang Men, Tian Chong and Teng She.

Her house is sitting South West and mapping that to her bazi, South West is her Si Men (dead door). So, she is living in a house that is bad for her.

Note:
There are more events can be seen using Qi Men Dun Jia by mapping Heaven, Earth and Man aspect together. Students who take up the Qi Men Dun Jia Bazi and Qi Men Dun Jia Fengshui courses will be guided accordingly.

Posted by Fengshui-Hacks at 06:39 No comments: