Going on tour will enhance your luck?

So, going on a tour will change your luck? A lot of people may think that this is a joke. However, ancient Chinese sages had a saying: it is better to walk a thousand miles than to read a thousand books.  All these years, not a single Fengshui scholar would stay in a single place forever. They would travel extensively to expand their knowledge and to seek the "Dragon Vein" for their own use or for their clients. They also need to “absorb” the good Fengshui energy of the places they visited for their own benefit. The visit could also disperse all the bad energies in their body and to re-charge the good ones.


Normally when a person is stressed up, he or she will think of going on a holiday to de-stress. This is the effect of one’s subconscious mind triggering the person to take action for a break to change luck.

Commonly, we read about people encountering many happy occasions when they are on holiday. There are examples of people finding their life-long companion during their holiday and then lived happily ever after. There were people who met their compatible business partners while on holiday, and later made huge financial gains. Some found their ideal jobs while on vacation, some return from their holiday to receive their dream promotions. Still there were some who received good salary increments after their holiday. This is because by sheer luck, they have chosen the correct place to go for their holiday, thus activating the positive energies of oneself and benefited from it.

On the other hand, we have also read about other unpleasant encounters while on vacations. For examples, these could be conflict between tour guide and tour mates, traffic accidents or tour mates being robbed. On 19th February 2013, a group of 26 Singaporean tourists lost some $50,000 in Italy when their belongings were stolen from their tour bus in Rome.
This is because they have chosen a wrong place to go for their holiday. The bad energy in this place has activated the bad energy in the person visiting, causing unpleasant incidents.

Places that can recharge your luck

There are a few places where a person can go to recharge his/her luck.

This is also a good place for those who are into spiritual practice as well. However, this does not mean that it will not benefit those who is not incline to that particular religion. In general, spiritual places have positive energy that can benefit a normal person.

The place is a small city at Si Chuan. In the Tang Dynasty, the two most well known Fengshui masters, Yuan Tian-gang (袁天罡) and Li Chunfeng (李淳风) were being instructed by the Tang Emperor, Lǐ Shì Mín to visit this city, to transform the Fengshui there. During one of the regular observations of the stars, both of them predicted that a strong leader capable of becoming an Emperor could be born in this city and he could eliminate the Tang Dynasty. Thus the two great masters were tasked to destroy the Fengshui formation there to protect the Tang Dynasty.

The two masters completed their task by chopping off the dragon vein, or removing part of a mountain range near the city. Both the masters made the same decision to stay on and spend the rest of their lives in this city, attracted by the extraordinary Fengshui formation of this place. Their famous book, Push Back Chart (Tuī Bèi Tú) was written when they were staying at this city.

The city is sitting North and facing South, with Black Tortoise at the back, Green Dragon on the left, White Tiger on the right and Red Phoenix at the front. The entire city is wrapped around with river forming the Jade Belt Formation.This city is a naturally formed excellent Fengshui place with good positive energies to enhance one’s luck.

In the history of China, this city alone produced 4 top scholars (状元) in the Imperial Examination. It was credited to the good Fengshui of this place.

Since the ancient times, we are all aware of the impact of Fengshui on an individual. Otherwise, how could the practice of Fengshui culture survive for so many thousands of years? When a person is born, his or her bazi determines the good and bad energies of this person based on the Tai Ji 5-elements concept. Therefore, if a person stays in a single place for too long, this person’s energy (based on his or her bazi) will be integrated into the energy field of the place. That means, if a person stays in a place with bad energy, sooner or later, he or she will be affected in a bad way. This has been proven where villagers that stay near electrical pylons, they have higher cancer rate compared with others and some are more affected than others as the bad environment energies enhanced their bad bazi energies.


The principle of luck enhancement tour is to visit a place which a person bazi good energy will be enhanced and bad energy discharged. This can be achieved by absorbing the good energies of the place visited as well as to discharge the bad energies accumulated prior to the tour. In this way, the luck of the person will be changed.

There is an ancient well that was dug by Li Chunfeng’s disciples on his instruction. It is named as Ba Gua Well (八卦井). It is located at the outskirt of the city near Si Chuan where  the real tomb of Li Chunfeng is situated. This is the place where Li Chunfeng spent the rest of his life, mainly observing the stars and practising Da Liu Ren Gungfu. 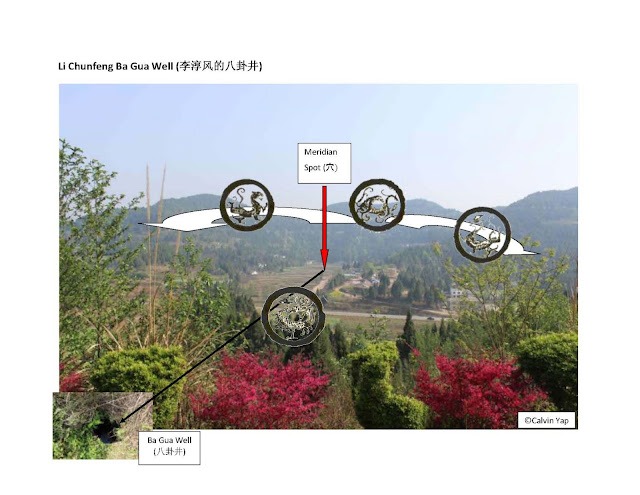 Note: The picture is taken from Li Chunfeng’s tomb. It is also the place where he observed the stars.

The Ba Gua Well is where all the good energies from the surrounding Fengshui formation gather and being captured. The water from the well is used for drinking and to re-charge the energy of the person. In addition, the water can be used to wash your face and hands to get rid of bad energy.

The tour is designed to help people to enhance or recharge their luck. The tour is organized and lead by qualify master and he will bring you to various places to absorb the good energies of the good Fengshui. In addition, various fengshui case studies will be presented.

Posted by Fengshui-Hacks at 22:07 No comments: